SAFC Season to Open on March 12 at Toyota Field vs. Detroit City FC 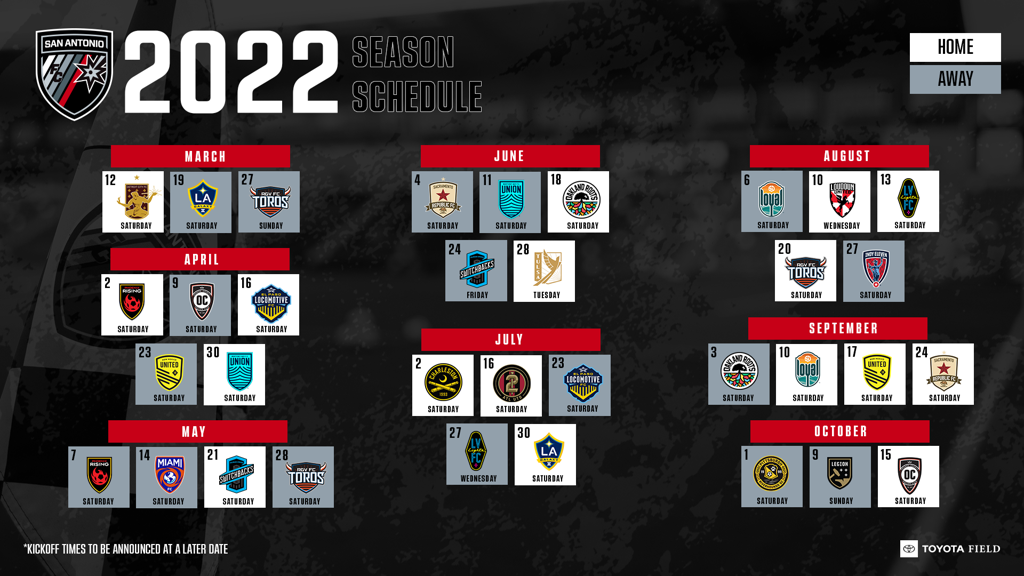 San Antonio FC will play each Western Conference team twice – one home and one away – with the exception of RGV FC who the club will face three times. In addition to those 25 matches against Conference rivals, SAFC will play nine matches against Eastern Conference opponents, including Miami FC (away), Indy Eleven (away), Detroit City (home), Charleston Battery (home), Atlanta United 2 (home) and Loudoun United (home) for the first time in club history. SAFC will face Western Conference expansion team Monterey Bay FC for the first time at home on April 30 and on the road on June 11.

In addition, the Copa Tejas tournament returns with SAFC facing RGV three times during the season and El Paso Locomotive twice, starting at home on April 16. In total, SAFC will play 28 Saturday matches, two Wednesday matches, two Sunday matches, one Friday match and one Tuesday match over the course of the season. San Antonio FC never exceeds five matches in any given month, playing five in April, June, July, and August.

Fans who would like to guarantee their place at Toyota Field for the upcoming season can purchase season tickets by calling or texting 210-444-5657 or by visiting SanAntonioFC.com. Tickets for individual games will go on sale at a later date, and information on the 2022 promotional and broadcast schedules will be released in the coming weeks.