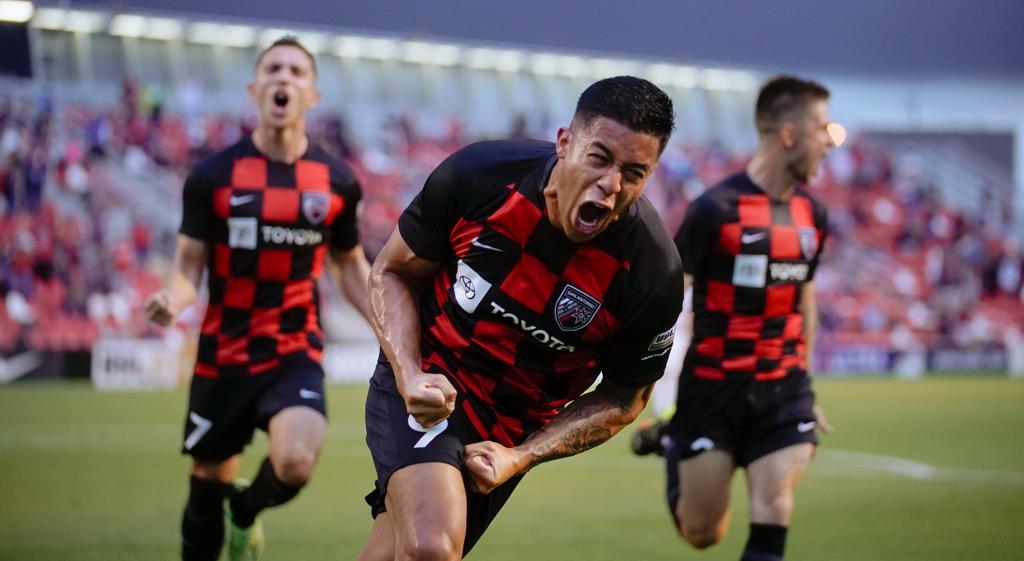 San Antonio FC opened the 2021 USL Championship season with a bang, defeating Colorado Springs Switchbacks FC 3-0 at Toyota Field in front of a sold out and socially distant crowd of 3,768. A hat-trick for SAFC forward Santiago Patino helped lead the club to its first three points of the season.

“Its been a long time since we had fans in the building, so its an emotional night for everyone,” said SAFC Head Coach Alen Marcina. “This is three points that we earned and deserved, and we did it for our fans. I am incredibly pleased with the level of commitment. We asked the players to be focused, apply intensity and be resilient for 90-plus minutes and that’s what they did so I am incredibly proud of them.”

SAFC opened the scoring in the 16th minute when a Marcus Epps cross was deflected by the Switchbacks keeper where Patino applied a simple header into the net. SAFC and Patino doubled the lead in the 28th minute when a great passage of play started by Cam Lindley found PC on the left side of the box. After a first-time cross, Patino expertly dispatched the finish to secure the brace and the two-goal lead.

After entering halftime with the 2-0 lead, San Antonio continued to pressure the Switchbacks goal in the second half. Finally, in the 87th minute, midfielder Chris Lema played a fantastic through ball that found Patino who calmly slotted past the keeper for his hat-trick. The trifecta of goals marks just the second hat-trick in SAFC history, and the first since Ever Guzman recorded three goals in October of 2019 at Portland. Patino also became the third player (also, Jason Johnson and Frank Lopez) to score at least two goals on his SAFC debut. The striker earned SWBC Man of the Match honors after adding five shots and four shots on target.

In addition, SAFC goalkeeper kept his first clean sheet of 2021, and 20th overall for the club. His 20 shutouts rank first in team history as the San Antonio native added one save on the night.

With the win, SAFC is now unbeaten in 14 straight regular season home matches. The club improved its overall record at Toyota Field to 42-10-22. The Alamo City club is now 4-0-2 in home openers, outscoring opponents 13-5 in those matches.

SAFC returns to USL Championship action next Saturday, May 8 at Toyota Field against Real Monarchs SLC.