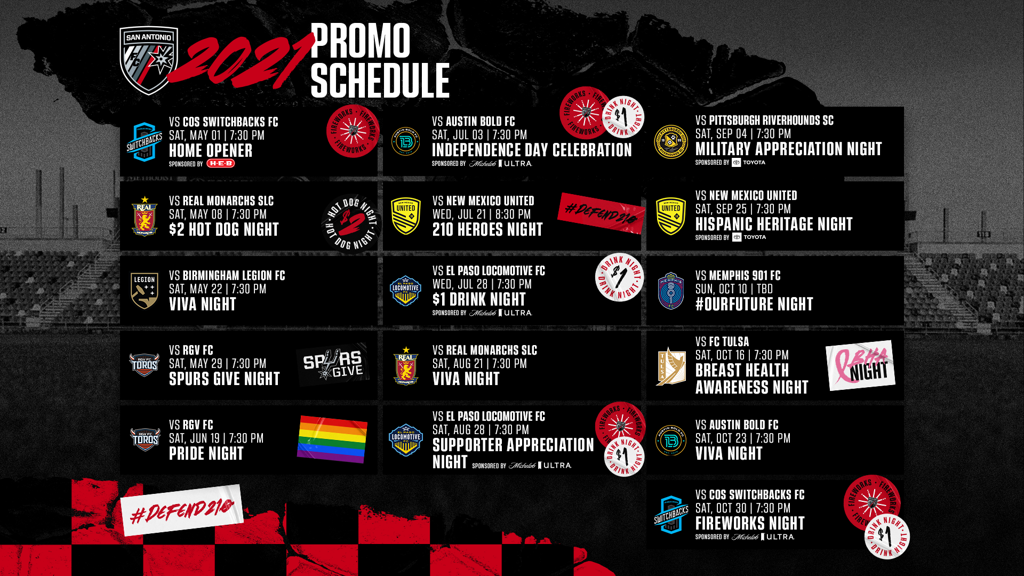 Season Ticket Members, along with fans who are subscribed to the SAFC Fan Club or have the official SAFC App, will have access to an exclusive presale opportunity beginning on Monday, April 19. Supporters can join the SAFC Fan Club by visiting SanAntonioFC.com.

SAFC will kick-off its promotional schedule on the home opener presented by H-E-B against Colorado Springs Switchbacks FC on May 1 at 7:30 p.m. The club’s first game of the 2021 USL Championship season will be one of four Fireworks Nights, with the fireworks show following the conclusion of the match. In addition to the home opener, the club will celebrate Independence Day on July 3 vs. the Austin Bold with a postgame fireworks show, while also hosting Fireworks Nights on August 28 and October 30. In addition, SAFC will host a $2 Hot Dog Night on May 8 vs. the Real Monarchs and a Michelob Ultra $1 Drink Night on July 28 vs. El Paso Locomotive FC.

San Antonio FC will also host three Viva Nights in 2021 on May 22, August 21 and October 23. Viva Nights will see SAFC celebrate San Antonio culture with more details coming as the season approaches. Additionally, SAFC will honor all San Antonio essential workers who have impacted the local community during 210 Heroes Night on July 21.

The Alamo City club will honor those who have served our country during Military Appreciation Night presented by Toyota on September 4, while also honoring those who have been affected by breast cancer during Breast Health Awareness Night on October 16. The 2021 SAFC promotional schedule also includes Pride Night on June 19, Hispanic Heritage Night presented by Toyota on September 25 and #OurFuture Night on October 10.

Further details on individual theme nights will come as the season progresses.