"This is professional hockey, right?" This tentative question came from a fan seated behind a columnist from the San Antonio Express during the San Antonio Thunder's 2-1 victory over Dallas Tornado in their inaugural North American Soccer League match 45 years ago today.

Not surprising, since soccer was a mystery to most general sports fans in San Antonio at the time. According to Ken Cooper, an English born soccer fan who came to San Antonio for college, the crowd of 5,124 that night at North East stadium was an interesting mixture of foreign-born locals who played in city leagues, Mexican-Americans who followed the sport south of the border and others who were experiencing the sport for the first time. Cooper admitted that he was "absolutely" surprised when the city was awarded an NASL team, but happy when the first match arrived. "Most of the players on my soccer club [Pearl International] including many [expatriates] who had grown up with the game were there and, of course, we were excited because we missed soccer." He remembered the differences in how experienced observers in the crowd viewed the action "Maybe we viewed the game a little differently than local San Antonians because when you know the game you recognize things like good passes, good shots and watching a player running off the ball. It was good to watch that caliber and it got better in the second year."

Steve Pate, the Tornado reporter for the Dallas Morning-News who traveled to San Antonio a day before the match, summed up the newness factor of the potential emerging rivalry "The dream is of 50,000 die-hard soccer fans, all in a frenzy, caught up in a tense Texas rivalry, a soccer rivalry, right here deep in the heart of you know where." He continued "But that's the dream." He then went on to describe the reality of the soccer portion of the night, that a makeshift Tornado lineup would travel to San Antonio to face an expansion team that looked a lot like the Los Angeles Aztecs of the previous season.

The Tornado were missing their captain, center-back Dick Hall, due to an injury and six other potential starters who had not been released from their English clubs at that point. A seventh player, key winger David Chadwick, couldn't secure his visa in time because the Telex machine at the London American embassy stopped working during transmission. 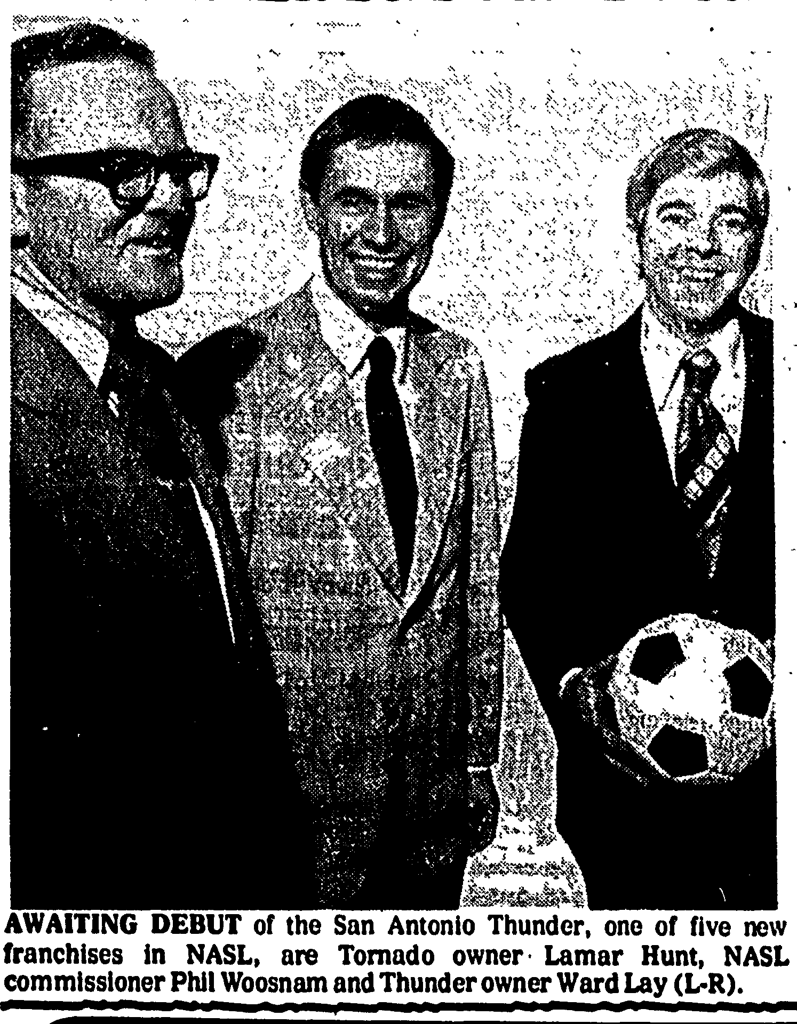 In attendance were NASL Commissioner Phil Woosnam and Dallas Tornado owner Lamar Hunt, who is clearly recognized as the "godfather" of professional soccer in Texas. The Express columnist who was in the stands also mentioned that Dutch born San Antonio Spurs center, Swen Nater, attended the match and his arrival caused a commotion that prevented the writer from getting one of the balls kicked into the crowd before the game.

The match was played on a Friday night, and that was by design according to Thunder GM Mike Boyle. To help sell the sport, the club intended to develop an American sports like atmosphere.  Friday night was the typical night for high school football and the Thunder hoped to extend this routine to professional soccer.

The team had a booster club that was more like a Chamber of Commerce than a Supporters Group seen at games today, cheerleaders, and a band, the "The Thunderation Generation." The band leader (also leader of the basketball Spurs band) was also supposedly hired to develop a fight song for the team. Cooper and other friends from across the Atlantic found the band to be a bit informal 'not the Grenadiers" as they were used to seeing. "When the English National Team or the Cup Finals were played at Wembley, they would always have a military marching band, all pomp and circumstance. Now we are in America, [the music] was a little more spirited, not pomp and circumstance, but almost a circus if you will." 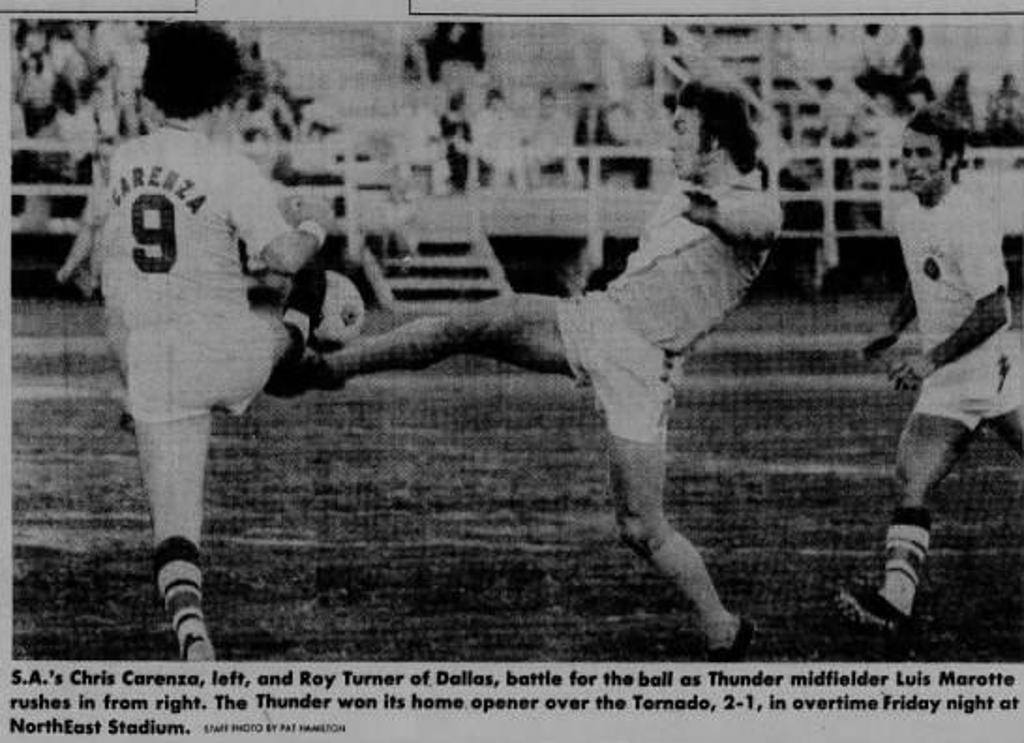 The game itself was almost a secondary event that night and that turned out to be a good thing. Winds that gusted north of 30 miles an hour played havoc with the action on the field. The Tornado, who were an original 1968 NASL franchise, managed only three shots on goal when the wind was against them in the first half and 14 in the second when it was with them in the attack. The NASL rules at the time were unique in worldwide soccer. To boost scoring and eliminate ties, the league regular season played a golden goal 15-minute extra time at the conclusion of tied matches, with penalties to follow if needed. Six points were awarded for a win and a club could also earn one point for each goal scored, up to three.

According to reports, the crowd came to life later in the match as pressure built with each succeeding attack on goal. Overtime was needed to decide a winner on opening night as the game ended 1-1 in regulation. It was a dream start for the locals as Greek left-winger Peter Filotis worked a give-and-go with forward Chris Carenza to break free on Dallas goalkeeper Ken Cooper (no relation to his local namesake), beating him to the lower left corner of the goal. Primarily a defender, Filotis, who played for coach Alex Perolli in Los Angeles, started at forward and ended up being named Man-of-the-Match. Dallas equalized on a 54th minute penalty, when Thunder stopper Daniel Califano tripped Dallas midfielder Ilija Mitic. Mitic, a prior Tornado player who was no longer with the team, had agreed to return to help supplement the short Tornado roster for the first two matches. He stepped up and converted the penalty, though the Thunder were a bit unlucky because the shot hit the crossbar and dropped straight down just inside the goal line. Both clubs also missed penalties during the match; Dallas forward Mike Renshaw and Filotis for San Antonio. 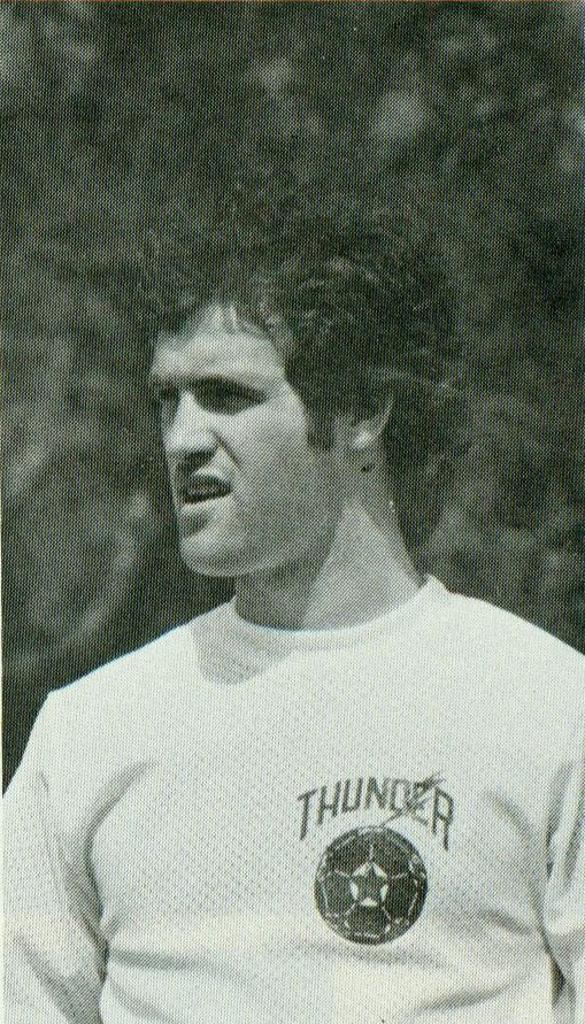 The match winner came from Scottish forward Jim Doherty, who had been substituted on in the 80th minute, two minutes before penalties would have been necessary. Receiving a pass from Filotis, Doherty turned under pressure inside the box and hit a left-footed strike into the bottom right corner. After the game Doherty told Jim Hutton, the Express correspondent, that playing forward was unusual. "I never played striker as a pro. The last time was in high school. But I kind of like it, especially after tonight." In the Morning-News game report, Tornado defender Bobby Moffat was quick to give credit where it was due. "Doherty had a great run and hit the ball and it seemed to dip." Goalkeeper Cooper added that "the ball seemed to bounce away from me." 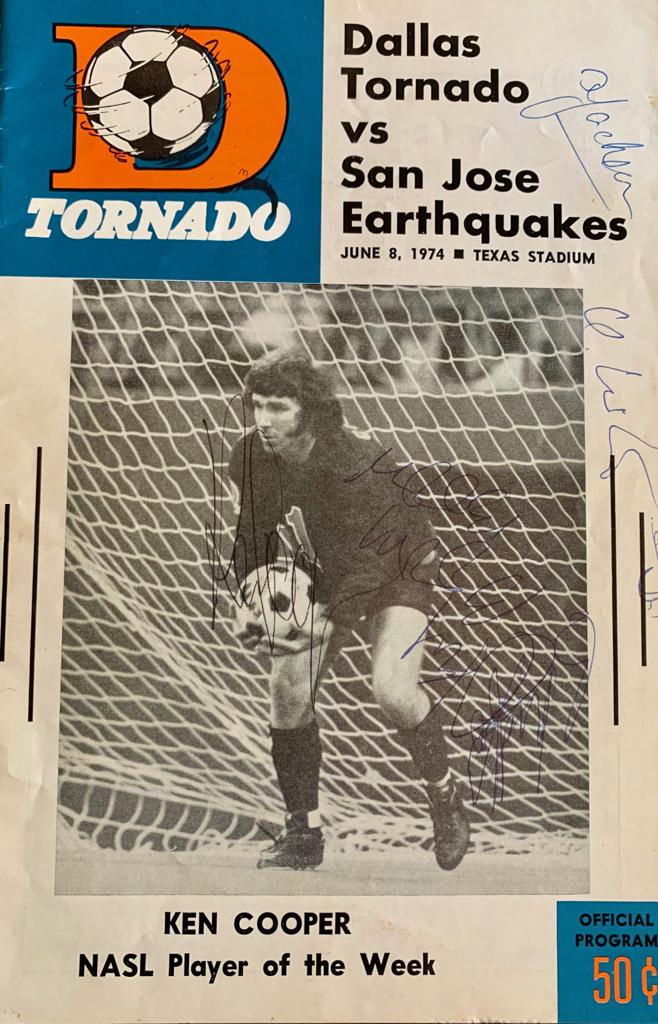 In an interview this week, the Tornado's Cooper said he didn't remember the opener as much as he did other San Antonio matches, joking that he better recalled the games the Tornado won. He clearly recollected the later Tornado trip to San Antonio in June, because they flew directly from San Antonio to New York that night to play in the first game Pele played with the New York Cosmos a day later. Cooper did remember the missing players in the Thunder opener, however, and having three young defenders start their first regular season professional game in front of him. He was very complimentary of their play that night and provided some insight about the deep history of player development in the DFW Metroplex. "They were good players. Give them credit. It was in the early days when we started to develop some American players. Kyle Rote Jr came through the system. Neil Cohen (a starting center back that night), a local boy who went on to play for the U.S. National team, also came through the system."

Left Back Mark Stahl, a Thunder draft choice who played both years in San Antonio, started and played the entire match. He commented in an interview last week how new everything was when they walked into the stadium on opening night because the team had never practiced there, even in the week leading up to the match. "The first time we saw the field was the first time the Dallas Tornado saw the field. Everything was new to us, the stadium, the layout, the locker rooms and we were a little surprised what the field looked like." He continued "This was my first professional game in a league that I looked up to and I remember being kind of starstruck."

The Morning-News correspondent was not impressed with the field or the game preparation at the match, noting that the field had "a three foot wide strip of artificial turf all the way down one side (used to cover the jumping pits). A gulley ran down the other side of the field. Protruding plastic drainage covers were packed over with sand, a substance which showed through bare patches of turf up and down the center of the field. " In another conversation about the differences between the 1975 and 1976 Thunder home stadiums, midseason replacement head coach Don Batie mentioned to me that the field at North East had a crown which made it difficult to use short passing for buildup play and led to more long balls than he would have preferred. The Morning-News writer also noted that the North East stadium had neglected to provide ball-boys, so the players had to retrieve balls from under the stands and the parking lot. Since the Tornado played in the home of the Dallas Cowboys at the time, Texas Stadium, North East Stadium must have been an interesting experience for their players.

Opening night also marked a homecoming for star American Kyle Rote Jr., who spent part of his youth in San Antonio. Rote, the son of NFL great Kyle Rote, was the first Texan to play for the U.S. Men's National Team and is part of the Texas Sports Hall of Fame. He had a quiet night in the opener, with only one shot on goal. 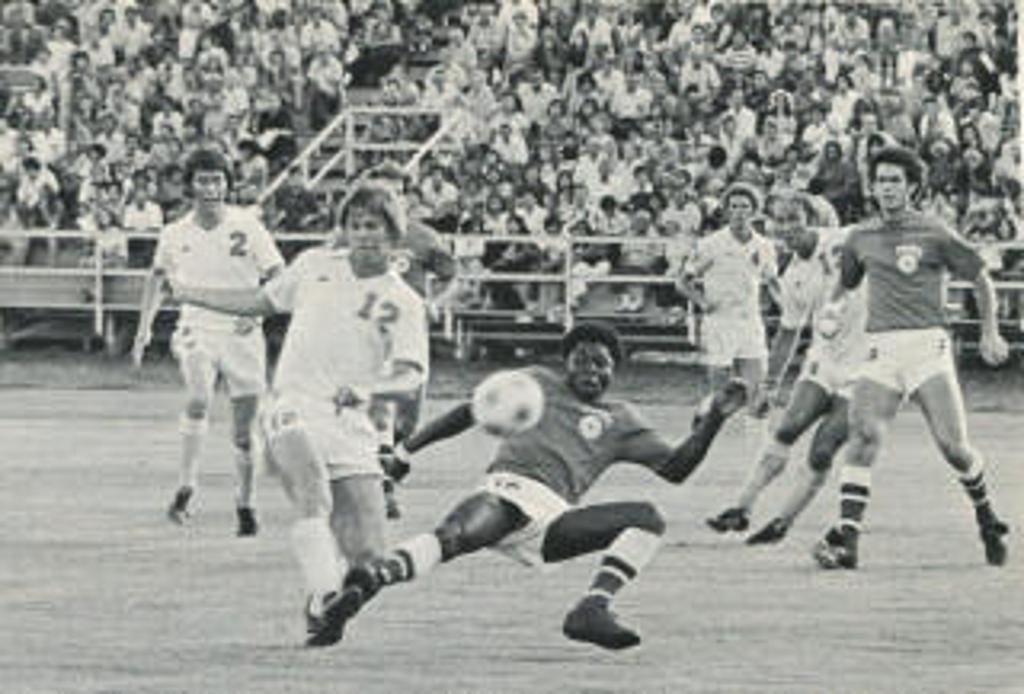 Kyle Rote Jr. in action later in the year vs. the Thunder. Jose Berico attempting the tackle (Image credit: NASLjerseys.com)

San Antonian Cooper remembered his amateur teammates engaging in the age-old comparison game, discussing whether the quality of the match equaled what one would see in "second division football" (EFL Championship today). He also noted that the club usually held a reception after the games, attended by players from both teams, at the now long gone Reed's Red Derby on San Pedro and there was a good chance that was where they ended up that night.

The attendance must have been a disappointment to owner Ward Lay and GM Mike Boyle, who before the game had hoped to see 8,000 fans in the stadium. The timing of their opener was unfortunate. The Spurs had been knocked out of the 1974-1975 playoffs on Wednesday night and the World Football League announced a couple of days before the opener that a new franchise had been awarded to San Antonio. Both stories diverted most of the media attention away from the Thunder's first game.

Head coach Alex Perolli, interviewed by the San Antonio Light at a practice session the next day, expressed his disappointment despite the win in the previous night's performance. "If you'd ask me if I was happy, I'd have to say no." Perolli continued, "If we'd played like we did against Tampa Bay (final preseason game), we'd have scored 10 goals on Dallas. Everybody started doing something on his own. But I can understand why they would lose their heads. New team, new franchise, new players, first game." Despite his frustration, he complimented many of his players, especially winning goal scorer Doherty and the Thunder defenders.

The first road test of the season awaited the following Saturday in Los Angeles against Perolli's old team, the Aztecs. This did not go well, but for now the Thunder could be pleased with the successful first match.

Follow the San Antonio Thunder 45th year anniversary over the next few months at Texas Soccer Journal (www.txsoccerjournal.com) or on Twitter @txsoccerjournal.