Single-Game Tickets On Sale to General Public on Thursday 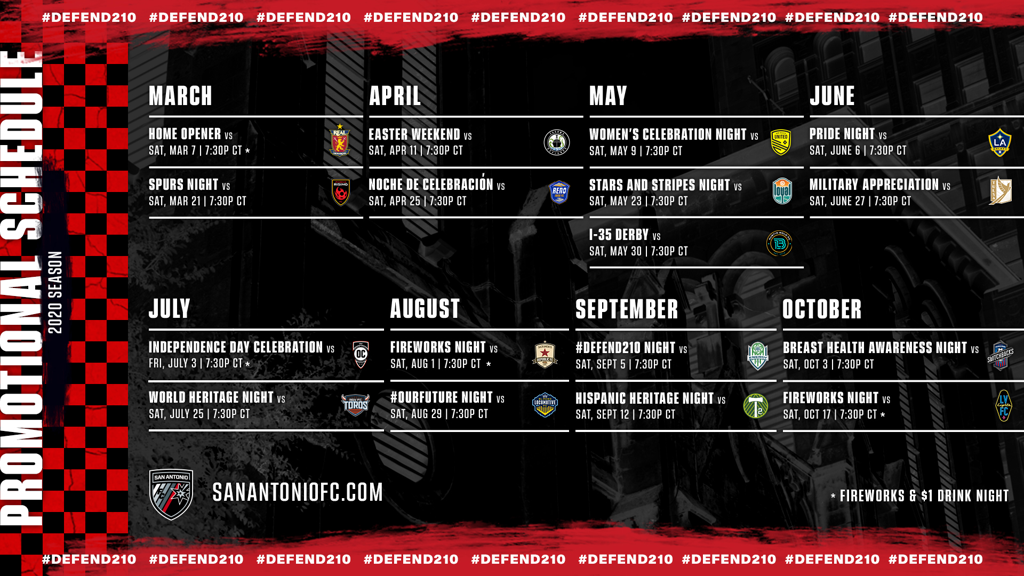 San Antonio FC today announced its 2020 promotional schedule, including theme nights, drink specials and more for each regular season home match. The full promotional schedule can be found on SanAntonioFC.com. Single game tickets starting at $10 will be available for purchase to the general public beginning Thursday, Feb. 6 at 10 a.m.

Season Ticket Members, along with fans who are subscribed to the SAFC Fan Club or have the official SAFC App, will have access to an exclusive presale opportunity beginning on Wednesday, Feb. 5.

SAFC will open its promotional schedule when it hosts the reigning USL Championship champions Real Monarchs SLC in the club’s season opener presented by H-E-B on Saturday, March 7 at 7:30 p.m. The night will be the first Bud Light $1 Drink Night of the season and will include a postgame fireworks show. Other exciting theme nights in 2020 include Noche de Celebración on April 25 vs. Reno 1868 FC, Hispanic Heritage Night presented by Toyota on Sept. 12 against the Portland Timbers 2, and the club’s first-ever Pride Night when it hosts LA Galaxy II on June 6.

In addition, the Alamo City club will kick off Independence Day celebrations with postgame fireworks on Friday, July 3 as it takes on Orange County SC, while SAFC will also honor those who have been affected by breast cancer during Breast Health Awareness Night on Saturday, Oct. 3. The SAFC regular season concludes against Las Vegas Lights FC on Saturday, Oct. 17 with a Bud Light $1 Drink Night and postgame fireworks show.

Further details on individual theme nights will come as the season progresses.