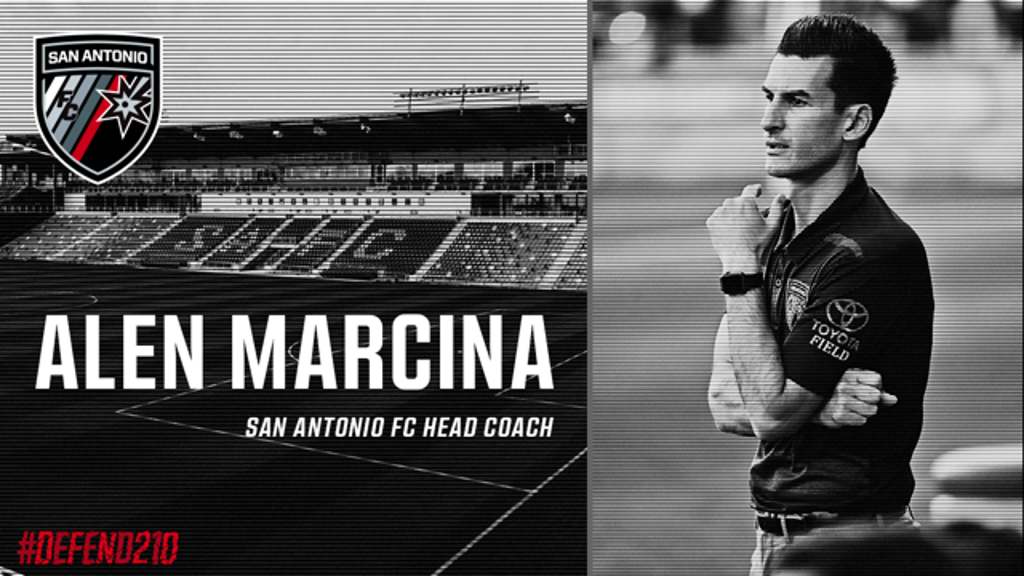 San Antonio FC today announced the club has appointed Alen Marcina as the team’s head coach. Marcina will transition from his previous role as a first team assistant coach as he leads SAFC into the 2020 USL Championship season, which kicks off this spring.

“As result of a thorough search process, we are very pleased to introduce Alen Marcina as the head coach of San Antonio FC,” said Holt.  “Alen’s strong leadership, driving ambition, tactical intelligence, and wealth of experience as a high-performing professional coach and player make him the right fit for our club. We are confident that Alen’s appointment will enhance our ability to perform amongst the elite teams in the USL Championship, while continuing our club’s important commitment to identifying, developing and integrating homegrown talent.”

Marcina becomes the second head coach in club history after originally joining the organization as part of the SAFC Pro Academy staff in 2018. While Marcina was with the first team as an assistant coach last season, the players scored a club-record 62 goals and compiled a 9-2-6 home record.

The Canada native previously spent over five years as a head coach in the North American Soccer League and USL League Two, most prominently with the San Antonio Scorpions in the NASL. The 40-year-old was with the Scorpions organization for each of the four seasons in its existence, starting as an assistant coach prior to being promoted to head coach during the 2013 NASL Season. In 2014, Marcina led the Scorpions to an NASL Championship after defeating the Fort Lauderdale Strikers in the Soccer Bowl at Toyota Field.

“I’m grateful to the leadership of San Antonio FC and Spurs Sports & Entertainment for entrusting me to lead this fantastic community club,” said Marcina. “Everyone at the club is committed to developing and evolving our identity by retaining and adding people of high character who will help us improve through their passion and performance. With our core values, we will improve our commitment to create a gold standard environment with a defined vision, playing style and integration philosophy. I’m excited to get underway.”

Following his time with the Scorpions, Marcina spent part of the 2016 season as the head coach of Rayo OKC (NASL), compiling a 6-5-5 record in 16 league matches. Marcina then spent the 2018 season with the Des Moines Menace (USL League 2), during which he led the club to a regular season title with an unbeaten 13-0-1 record. Overall, Marcina has compiled a 48-35-21 record as a head coach in all competitions.

Prior to his time as a coach, Marcina enjoyed a successful playing career in which he featured for 13 clubs across seven countries in the span of seven years, scoring 73 goals in 185 professional appearances. Playing as a striker, Marcina began his career with the Ottawa Wizards (CPSL) in 2002 before making a move to Europe, where he played for Greek powerhouse PAOK Thessaloniki as well as clubs in Iceland, Germany, Denmark, and New Zealand before returning to play in the United States and Canada. Marcina officially retired from playing professionally in 2010.