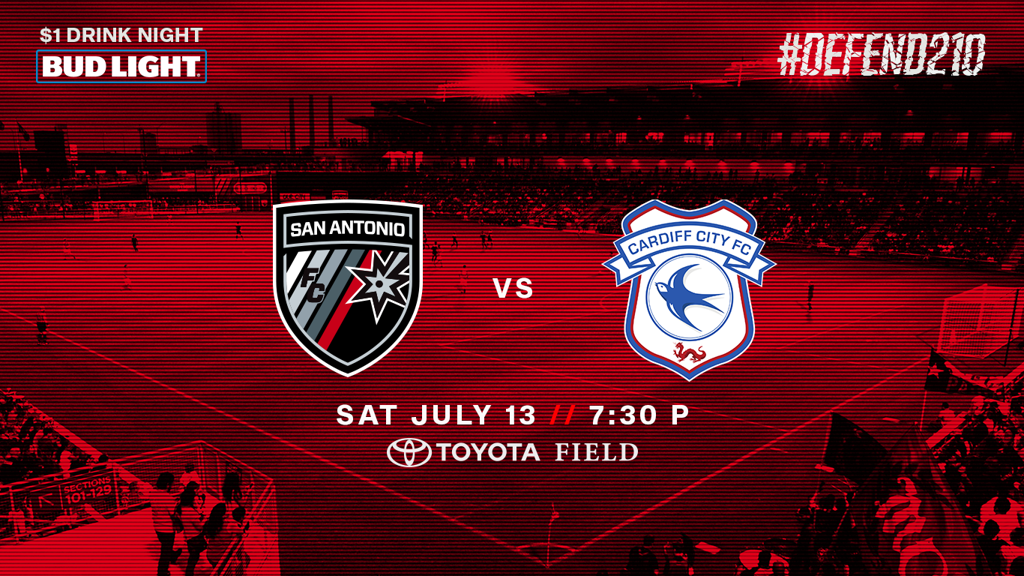 San Antonio FC will host Cardiff City FC in an international club exhibition match at Toyota Field on July 13 at 7:30 p.m., the club announced today. Cardiff City recently completed their 2018-19 season in the English Premier League (EPL) and will become the first current or former EPL club to play a match in San Antonio.

Tickets for the match are included in all San Antonio FC Season Ticket Membership packages, and the night will be a $1 Drink Night courtesy of Bud Light. An exclusive pre-sale window for STM’s to purchase additional tickets is open now and will run through Monday June 3. Members of the SAFC Fan Club and fans who download the official San Antonio FC app also have access to an exclusive pre-sale window, starting today at noon. Tickets will then go on sale to the general public on Tuesday, June 4 at 10 a.m.

“We are delighted to host what will be an historic event for the Alamo City in July,” said SAFC Managing Director Tim Holt. “Our supporters have encouraged us to bring a top overseas opponent with a storied history to Toyota Field, and we are excited to have the opportunity to test ourselves against a club as accomplished as Cardiff City FC.”

Founded in 1899 and renamed Cardiff City in 1908, the Bluebirds have won the Welsh Cup 22 times, the FA Cup once, and were crowned champions of the English second division in the 2012-13 season. The team is managed by Neil Warnock who has managed 15 clubs, recording a record eight different promotions. In 2018-19, Cardiff featured internationally recognized players including Canadian Junior Hoilett and Icelandic international Aron Gunnarsson who helped the Iceland national team become the smallest nation to ever qualify for the FIFA World Cup in 2018.

The match marks the third international club exhibition game that San Antonio FC has hosted at Toyota Field after hosting Santos Laguna of Liga MX in both 2017 and 2018. SAFC tied Santos in 2017 before falling in penalty kicks prior to defeating the former Liga MX champions in 2018.

San Antonio FC is currently preparing for their road trip to Sacramento this weekend prior to returning to the Alamo City for their next home game against Reno 1868 FC on June 8, which marks Military Appreciation Night presented by Toyota. SAFC fans can purchase tickets by texting or calling the SAFC sales office at 210-444-5657 or by visiting SanAntonioFC.com. Supporters can also follow the club by liking San Antonio FC on Facebook, as well as following the team on Twitter (@SanAntonioFC) and Instagram (@sanantoniofc).